After 15 years of exchanges and collaboration between Luisen Gymnasium Düsseldorf and 3 Malagasy public schools, the partnership was officially signed on March 15 in Düsseldorf in the presence of more than a hundred guests including important personalities as:

The signature of the Convention between the German High School and the German-African Dako eV Association representing the 3 schools in Madagascar, a first step in this partnership, aims to provide Malagasy schools with materials, infrastructure and basic food products to enable students to benefit the international standard of education and a diligent presence. This objective responds to one of the Millennium Development Goals themes: “quality education”.

Luisen-Gymansium, an international high school, works in close collaboration with UNESCO’s educational projects since 1992 under the high patronage of the Mayor of Düsseldorf. For the first time, it formalized its partnership actions with a foreign country Madagascar.

In a friendly and warm atmosphere, the signing ceremony was preceded by a series of relevant and well organized speeches and presentations. To name just a few: the young Malagasy schoolgirl Luisen -Gymnasium has highlighted the Malagasy culture by singing a Poopy title “Izay manao ny marina”, the concrete actions accomplished in the 3 southern schools were mentioned with photos by the UNESCO coordinator, the Malagasy national anthem was fervently sung by the students of a 6th class and the Malagasy diaspora, the performance of the high school student pianist dazzled the audience by playing a piece of Beethoven .

The commitment of the Mayor in such a social actions, as well as that of the parents of students demonstrate the will and the good health of the German-Malagasy cooperation. Moreover, the Chargé d’Affaires emphasized in her speech the importance of intensifying and developing this kind of partnership in order to make quality education accessible to young Malagasy. Indeed, the interest of young Malagasy for Germany is increasing.

To end the evening, the reception offered by the high school allowed to establish and exchange interesting contacts for prospects of intensification of relations.

The dynamism of the partnership will also result to the organization of a “sponsor walk” on April 30, an event for Madagascar in the City of Düsseldorf in order to collect financial aid for the 3 schools Malagasy. 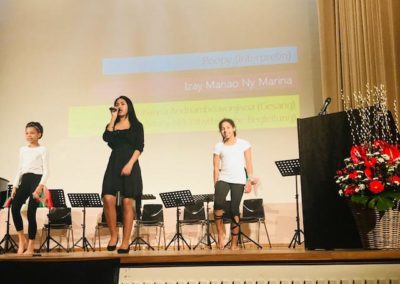 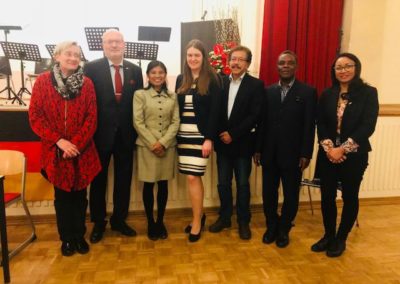 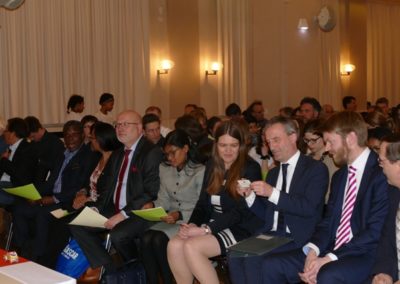